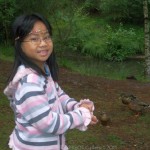 My niece Trish, is with us again this summer. Trish is the daughter of my elder brother who currently resides in the US. She came to visit us for the first time summer of last year. Since she has no sibs of her own, (my two younger sisters living in Belgium also have one child each a Son and a Daughter respectively), we thought it would be nice if Trish could come and visit us during summer…if possible.

So, for the second consecutive summer in a row, Trish crossed the Atlantic Ocean to be with us. Her experience this time flying as Unaccompanied Minor was not as exciting as the first one. It was difficult in the plane because she didn’t have her own tv monitor behind the seat in front of hers. The airline didn’t have sufficient entertainment for kids her age. She said she just slept thru the flight.

When I came to pick her up at the airport, we almost missed each other cause the agent who escorted her looked to me like she was not quiet sure of what she was doing. Proof of that, she even forgot to hand to me the passport of my niece. With some other airlines, a child is given a pouch where all their documentations are placed upon check in. Passport, ticket, receipts and boarding passes/travel itinerary goes into the said pouch. Once the child boards the aircraft, said pouch is handed over to the Purser/Flight crew for safe keeping. Upon arrival at the destination, said pouch is handed over to the ground staff who will then assist the child to get through customs, baggage pick up and eventually turn the child over to the custody of the Parent/Guardian at the final destination. Said pouch is then either hanging on the child’s neck or if its just an envelope, handed over to the parent presenting identifications.

In our case, although the ground crew worked with us beyond the baggage check area, she didn’t hand over the said documents. I assumed that my niece had her stuff with her in a pouch stuck somewhere in one of her bags (she had three with her). Only when I was preparing her stuff to leave for Brussels, did I notice that her passport and other documents where missing.

The advantage of working at the airport is that one has somehow an idea of how the procedure works. If something goes wrong, it wouldn’t be such a hassle to correct it. Or so I thought. The soonest I was back at work, I immediately went to the airline to complain about the missing passport/documents. At that time, there was a Lufthansa agent talking to the flight manager of the airline. The flight manager told the Lufthansa agent to call Lufthansa Lost and Found services. Then the agent passed the phone over to me saying she didn’t understand the whole story. I should explain it myself to the person at the other end of the line. The said person then gave me another number to call. She said, it was the agency that does Unaccompanied Minors services for Continental airlines. After putting the phone down, I called the number immediately. I could talk to the person who still has the passport of my niece. Problem was, I work most of the time at Terminal 1 and their office was in Terminal 2. On that day that I called them, I couldn’t go to their office in immediately. I told the lady that I would be picking up the passport during my break-time later in the afternoon. She said I should call her first before I come over. By the time I could go on break, nobody was picking up the phone in their office anymore. That was a Friday. Saturday and Sunday I couldn’t reach anyone.

Another problem was, the airline counter was only manned/open during check-in times which was only until around 12:30 noon. Strange as it is, when I tried to call a listed number at the counter for services outside the check-in times, no one picks up the phone. I always got an automated voice message. When I could finally reach someone from a different number and the guy said he didn’t have any passport returned/surrendered to him. And that they don’t do any services for the airline that my niece came in with. I was slowly panicking. I couldn’t find the lady whom I talked to previously anymore. I went to lost and found to check, in case they surrendered the passport there. After several minutes of checking in the system, the lady at the lost and found office said she didn’t have a passport in my niece’s name registered. The only option for me was to wait until Monday and try to call the Passenger service agency again. It was really close since, we were supposed to go to Brussels Tuesday morning.If I needed to get the passport back before then. As a result, I left for work Monday morning two hours earlier just to be on the safe side. I got to the airport in plenty of time. But when I called the lady again who I got to talk to in the very beginning, she said that she was on break and would still need an hour to get back to her office. WTF! I was slowly boiling in annoyance. I said I didn’t care if she was in Hell on break, I needed the passport before 1:00 pm that day. I then implied that their agent who is responsible to hand the passport to me was not doing her job properly and now to have to wait for her to finish her break time is out of the question. She then obliged but of course without any “apologies” that she would call someone in their office to come down and give me back the passport. She gave me instructions to go to the information counter in Terminal 2 and call a different number again from there. Somebody would then come down and bring the passport to me. Then she said, “let’s say in half an hour”. I said in ten minutes and that I could wait no longer than that. I went there and called them again. There was a lady who came down, not the same one who assisted my niece unfortunately. When I asked her to wait until I could check if all the docs are still inside, she was very defensive and said immediately: “I was only told to bring that down here. I don’t know what’s inside”. Yes, okay, but let me see first. But she was about ready to leave. She said, as in, word for word: “I gave you the envelope. Have a good day!” That was it. No apologies about the inconvenience nor the mistake of her colleague.

It took all effort for me to bite my tongue then. I had to keep my calm then. I didn’t want to go to work still irritated as I need to be calm when I am at work. That’s one rule for me. In the end I was just happy that I could get the passport back. But now I know, have to avoid that agency again if I can. Oh, of course, the airline as well. All the time I was going around in circles trying to get the passport back and there was no mention of the airline, except at the beginning. There was no effort on their part to help get the passport back. Imagine for someone who does not work at the airport how frustrating it would be for them to get back their missing item. Okay, one can go to the Lost and Found office… but that only works if the missing item was surrendered there. In our case it was not. So, the last time we would be using the airlines’ services is when my niece would fly back to the US end of August. She has a round trip ticket with them and we can’t change that anymore.

This entry was posted in Travels. Bookmark the permalink.