Have been passing my time locked up in the kitchen during the last weeks-well, what to do? 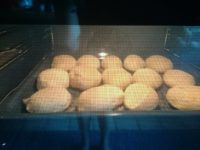 At the moment, can’t really do much. City is locked down, not allowed to visit and of worst–was not allowed to do my favorite past time and socialization activity…my work! Hahaha… No colleague of mine believes it when I say that I come to work so that I have a so called-social life.

Right, it is most probably unbelievable, but that is how my hubby calls my work.

I’m lucky that I am enjoying so much blessings, that’s why, I am always thankful to the Lord for a beautiful life.

So, I have tried new recipes including homemade pizza and…. PANDESAL!

Yes, I finally managed to try baking it myself.

The thought just came to me.

Have you ever had a person whom you deem special and you value too much, only to find out that, that very same person just takes you for a pushover??? I just realized, the group of friends that I have valued for so many years… that I deemed special to me, for so more than a decade, I accepted the so-called “friendship” that was offered me only to find out that it was all just a farce.

How to avoid these kind of people???

I’m thinking show passive response. It does not make sense at all trying to confront the person since, the think tank of that person is similar to that of a cockroach! (Sorry for flaming out like this)!

Well, needless to say, I don’t have to worry too much about that person. Someday, I hope i can really forgive that person… and eventually forget how I was wronged.

Unfortunately, scars hardly ever goes away. 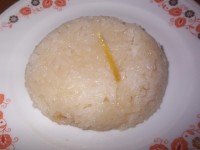 I’ve been craving for this Filipino sweet rice delicacy for some days now. My problem is I’ve never done this myself before. My mom used to serve this for our merienda or breakfast way back when I was a child. Yes, this rice recipe, like most of the Filipino rice delicacies in the Philippines, can be eaten for breakfast or merienda (snack).

Thing is, may it be for between meals (merienda=snack), or for breakfast, I always had this with the good old sikwate (hot chocolate drink). Perhaps, later on in my growing up years, I also had this with ice cold coke. Well, that’s how kids are, always experimenting.

Apropos, experimenting. So I have been craving for the “puto-maya” of my mom. Thing is, she now lives thousand of miles away from me. So unlike before, now I very seldom have the pleasure of eating this delicacy. Nowadays, I just content myself to eating puto maya at parties where I get invited to. Of course, provided that a nice Pinay would prepare it… hehehe.

Today, I couldn’t help myself anymore though. I finally decided that I would experiment myself. I went out to the nearest grocery and got the ingredients that I didn’t happen to have in my pantry.

I guess there are several ways to cook puto maya. But I remember that my mom used to make it the complicated way. Oh, you have to understand that for me, if one is cooking using several pots and pans, then I assume it is already a complicated recipe that he/she is preparing. The way i cook my stuff, is to heat the pan, put the first batch of ingredients which is normally composed of onions, tomatoes and garlic. Saute them and put the rest in, whatever they may be. Most of the time they turn out okay :). Alas, this simply won’t work with the Puto Maya.

I first prepared the rice. Rinse the rice with cold water. I did this two times. I don’t know why, but I just seem to remember that when I was young I was always told to rinse it twice. Or at least until the water is not cloudy anymore. Later on, I found out that the more you wash the rice, the less nutritious it becomes. Or so, somebody told me again. But again, somebody said that this is only true to enriched American rice. Anyway, I digress.

I cooked the rice separately. On another pot, I poured in the coconut milk keeping it to boil. Slowly i poured in the sugar while continuosly stirring the boiling coconut milk. Once it became sticky, I also put in the ginger strips that I prepared. I continued stirring it until the mixture turned a bit brownish. At this time, the rice already cooked, is slowly cooling down a bit. I scooped  it out of the pot and transferred it to the coconut mixture. I folded and mixed like beating a batter.  While doing this, I could already smell the rich aroma of rice and ginger. I took it out of the stove. Let cool down a bit. Then I started molding using one of my dessert bowls. Since i don’t have banana leaves, I had to content myself with eating it directly from the breakfast plate. Oh, I almost forgot to take a photo of my creation. To make it look more presentable, I put in two fresh basil leaves. 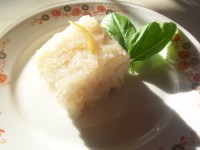 A few minutes later, hubby came into the kitchen sniffing. He actually said, the blending smell of the ginger, coconut milk, rice and basil made him feeling hungry. I hurriedly poured him a cup of fresh hot coffee with cream but no sugar since the puto maya to my standard is already sweet enough. Well, actually, I drink my coffee most of the time black so it goes well with the puto maya. No hot chocolate for me today, as I am following a strict diet regime. Maybe, tomorrow morning for breakfast I can have my puto maya with my hot chocolate.