It would have been my baby…

Lately I have been tired all the time. I wondered why this was happening to me again. I was like this before, that was 4 years ago, before I started with Fasting and Wandering and before I changed my eating style. But after the change, I have been fit all the time. Very energetic, hardly sick–not even my allergies managed to disrupt my days. In short, I still have allergies but seemly controlled. I have my spray from my Heilpraktikerin (Alternative Medicine doctor) that I still use regularly as therapeutic help in getting rid of my allergies. I digress.

As I was trying to figure out what was wrong with me, the thought that I could be pregnant was first in my list of “could it be?”. 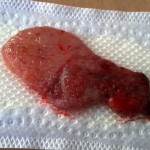 If my memory serves me right, the first day of my last full period was January 17. In February, I had it for just a day. And this March my period was delayed for a week…which is actually not abnormal since it has happened already before. Not often but it has happened once or twice. It should have started already March 14, but I just had it March 21. March 24 at night, I had strong back and abdomen pains. After sometime, during early evening I had a very strange discharge. It was one whole clump of fat or so I thought. Luckily, it did not fall directly in the toilet but it came out just when I was about to go to relieve myself. It fell directly on my sanitary pad. Thing is, it was not bloody at all.

The following day, after work, I went to my OB-Gyne to show it and ask what it is. She unfortunately she has never seen anything like it before. She immediately sent me to the hospital and had me checked and the specimen too. At night, the head doctor finally decided that she they would have to perform Curettage to be sure that there is nothing left inside my uterus that shouldn’t be there.

Since it was just a minor operation, I could go home the same day. I was discharged from the hospital after 9 and a half hours admittance. But I was ordered to stay at home, no take a long bath, no heavy lifting and take everything slowly.

Anyway, from the time that I had the discharge, until now I still have no idea what it was that my body forced to emit from me. I have to wait till the end of the week or at least until my OB-Gyne would contact me for another appointment to talk about result of the tests on the specimen. The hospital crew did promise that it would happen at the latest by end of this week. Until then, I sit and wait…eagerly.

If indeed it was pregnancy, I live in peace knowing that I am capable of bearing a child. I just need to wait for the time when I would be blessed with one. I live in HOPE.

This entry was posted in Personal musings. Bookmark the permalink.