I am attracted to slim, elongated eye glasses. Shades for the sun, or prescription ones for the eyes. My very first shade against the sun was one half frame Ray-Ban pilot eyeglasses. I loved it. At the time it came, I still couldn’t afford. I was still working at the Duty Free Philippines then, so I asked one Store manager if they could reserve one for me. My Manager, although jokingly, told me that it was not necessary. I should just get something else, because the shades was simply too small for my wide eyes. “Huwag yan,” he said. “Hindi naman kayang takpan ang talukap ng mata mo niyan!” I shrugged him off and put the glasses to a corner in one of the storage cupboards. It stayed there for a while, until I could finally afford to pay for it. I used the eyeshades for a while until one relative finally convinced me to part with it. “Siya naman ang nakinabang kahit hindi din kayang takpan ang talukap ng mata niya nung shades ko…hahaha!”

From then on, I made it a point to look for the right shades for me. Optimal size and darkness of the tint on the glasses. But every now and then I still get the wrong ones. But I still enjoy using them. Who cares? I like it so I use it. “Nasa nagdadala naman yan, diba?” 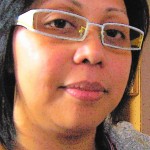 Some years back, I was ordered by my eye doctor to get myself eyeglasses. I was starting to use the reading glasses which was not actually helping my eyesight. On the contrary. She checked my eyes and ordered me to go the the eye shop to get the right ones for my eyes. I did, it has the right lenses, but again, I was attracted to the elongated, thin frames. I ended up getting three, two as reserves. The one from Elle was my favorite. White and yellow combination of frame color, very chic and very feminine. I always get compliments when I use it. Apparently, though it is too thin for my face, it still looks good on me. Or maybe the people are just being friendly? Well, I used it for a while, until I finally lost it. Or so I thought. Then just when I was cleaning my cupboards last week, I found it again.. Yehey!

The one from Carerra, I gave my sister. (Now you know why I had to have two reserves!) She needed a good frame for her eyeglasses. She liked it so I gave it away. I just told her I wanted the lenses back. She can get it swapped with the lenses made for her eyesight specifically. She promised she would send them back to me. The one that I got from Agnès, is very sentimental for me. I bought it with Mamang. We went to a shop together to order her eyeglasses and she saw that other one which she immediately said was suited for me. I bought it, with no second thoughts about it. Not even the purple color prevented me from buying it, haha…so lame! It’s the only one left with me now. I already had the lenses changed since then.

With regards to shades though, I learned to get the huge ones now. I had one from Gucci, that my colleague from work loved so much. NOPE! I definitely did not just give it away to her. I still have it in my cupboard earning dust, hahaha. The other one for daily use, is from Guess.

This entry was posted in Gadgets, LP Challenge. Bookmark the permalink.