Short trip to the Alpenland

Together with some friends, hubby and I had a short vacation in Austria last week. We initially planned to visit my family in Belgium, but my sisters advised us otherwise, since my aunt caught the Flu and my sisters were not quite sure if it was safe for us to visit. So, the change of plans was all finalized at the last minute.

It was not the first time for hubby and myself. Since Austria is accessible by car, train or plane, we have visited the country often. We used to visit the place two times a year, during each time for a week or so depending on the activities planned either trekking or for my husband, cycling. It’s like the third option for us if we had enough time to spare from work and everyday conundrums without travelling on a long haul.

Anyways, like usual, we drove from Germany to Austria. Normally the trip takes six and a half hours. It took us 2 hours longer though, because we went through several traffic jams due to road constructions.

On the side note, we left Ger 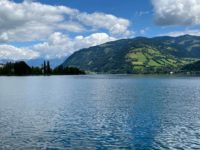 many with a box of surgical masks and hand gloves thinking we would be needing them as we explore the neighboring country right after lock down has been lifted. It was, to our surprise, not necessary. In Austria, everything was back to normal. One could go anywhere shopping or gallivanting without wearing the masks. Although social distancing is still advised.

Suffice it to say, we reached Austria later than planned.  We checked in at the hotel and then decided to take a rest instead of start roaming through the small town on our first day as we have planned prior to the trip. It was also raining anyway, so it didn’t make it anymore enjoyable.

On the second day, we went to Zell am See and ended the day with a tour of the small town. At the back of the hotel was a small mountain that one could climb either by walking or with the lift. The hotel where we stayed at is located at the valley. So, it was very convenient for us to a do a short walk up in the mornings and in the early evenings after dinner. We had planned to revisit Salzburg and the Großglockner . Unfortunately, on the day when we planned to go up the Grossglockner, it was raining hard and very foggy, that we decided to cancel trekking up to the high mountain. We did visit Salzburg as planned.

It was not a very good trip for me personally though. On our first night, I had stomach ache and diarrhea. The following day, my stomach calmed down a little. I could still go out for half the day, but then, the diarrhea came back and stayed for the next three days.

Suffice it to say, our friends did manage to enjoy the trip although with some concerns about my condition. But not after several assurances from me that I was ok aside from the loose bowel movement and stomach problems.

This entry was posted in Friends, Personal musings, Travels. Bookmark the permalink.