Sunday lunch at the Ronneburg

It finally felt like spring is here last Sunday, the 16th of January. The sun was shining the whole day and it was also not very cold, temp-wise. After weeks of enduring the negative digit temperature, it was nice for a change to have i think almost two weeks of above “0” degrees temperature. 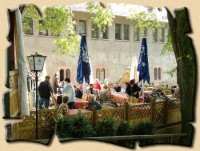 Anyway, hubby and I decided to go for a walk at a nearby palace ruins where we could also have lunch. We’ve been to the place before several times, but this was the first time we tried the restaurant inside the castle ruins. Since we used to go there during springtime or summer, we enjoyed most of the time the garden bar/restaurant that they have outside, but never the Café inside.

It turned out to be a very good decision. The food was just wonderful. The Zander fillet that I ordered was heavenly. Hubby said that the pork meat with mushrooms in rahm sauce that he ordered was also excellent. On the way up to the castle, we passed by some paragliders at the grounds. Apparently, they also have a course offered every Saturday at the castle grounds. “Learn to Paraglide starting at 79,- €”. Not the age, hehehe. That’s something to add to my “to-do” list, but sunny as it was on the day we were there, I would not be caught dead paragliding at 8 degrees celcius. May in the height of the summer season, I will be courageous enough… (here I am procrastinating again), haha! But “thumbs-up” to the two guys who were really going at it for like almost forever. At least, I saw them already from a far on our way up to the grounds of the castle. And, when we left, they were just finishing up. Counting the time we walked up from the parking place until the time we left the castle grounds, that was probably more or less 2-3 hours tops. I wouldn’t stay out in the colds as long as it is not a matter of “life and death” scenario. I can enjoy paragliding anytime in the summer, but not in the middle of winter.

Anyway, the resto has a lot to offer. Aside from the excellent food, the place has a very nice Ambience. More medieval time. They also rent some rooms for private parties. Which I came to the idea. When I reach the ripe age of ___ty which will be in two years time, I would like to have a “medieval era” concept for my birthday party. If the price is right, with costumes and all the props, I may as well do that. Of course, I won’t be able to invite more than 20 guests. I would probably just invite the closest friends. I have to inquire about their price range though. If the price is right… I think I just might “spin the wheel”!

For more info on what the Resto has to offer, check out their website here.

This entry was posted in Restaurants. Bookmark the permalink.