The very much overrated Valentine’s day came and went; and as always, the prices of flowers and chocolates and other gift essentials skyrocketed! Thanks to Tax-Free shopping, for tourists, it is still worth the travel and gift buying.

PLANET, among others, also provides tax free services to European tourist shoppers. Planet is the second largest tax-free service provider in Europe. I am proud to be a part of the Planet family since May 2013 and happy to say that we are continuously working to better improve our services.

Recently, we launched “Instant Alipay” –Yes!!! We jumped into the bandwagon of the Digital wallet era!

February 14 is a special day – because it is St. Valentine’s day or Heart’s day as celebrated globally.

At the Planet Tax refund Desk in Frankfurt Airport, we also had a very meaningful Feb. 14, 2019. We reached another milestone, as we launched in our options of refund payment method … the innovation that most – if not all Chinese consumers prefer – the Instant Alipay.

I have been eagerly waiting for this… looking forward to the time when I could finally offer to the guest the real-time tax back method. Using the very popular (at most to the Chinese) a non-cash/digital Tax refund payment method: INSTANT ALIPAY.

After the guest has done Customs declaration and getting the Customs Seal on their Tax-free forms, they can then proceed to the tax refund Operators’ counters.

To process or complete a refund, an ocular inspection of the tax refund voucher must be implemented. The Physical voucher is checked from top to bottom, purchase details are compared with the invoice presented and customer details written on the voucher are compared to the passport presented. If all requirements are met, then we proceed with the processing of the refund transaction. For the payment method, our guests have several options. Depending on their preference, they can choose if they want to have the refund in cash, per credit card money transfer or for the Chinese customers more especially, we have the Alipay refund method.

The first customer was hesitant saying I was not doing it right. I do not use a QR code scanner at the counter. I use instead of, the Barcode reader.

For the Chinese guests, they think if we use the Barcode, it would mean we are getting money from their account and not paying into their account. I explained, with my very few Chinese vocabularies and with “hand gestures” that it was correct to use the barcode for them to get their money.

Finally, just after a few seconds, the very much awaited “bling” from the customers’ ALIPAY phone App was heard. To this, the reward came… I got a very bright and happy smile from the customer. The best part was that, after he got his money thru Instant Alipay, he turned to the next customers in the queue, a young couple and proudly suggested to them to do the same. Right at that very moment—Instant Alipay payment method started rolling. Best marketing strategy: Positive words of mouth passed on from customer to fellow customers.

Of course, the small gift that was distributed after a successful Instant Alipay transaction went through, also made it exciting for the customers. This filled my heart with more joy, as one can truly see the appreciation of the customers.

We at the Planet Refund Desk Frankfurt Airport always go the extra mile to help the customers. So, we are very happy and proud to see our customers leaving the counter with a satisfied look. They leave our counter with a very good impression of doing a Tax refund business with us. I am quite positive that each and every person leaving us with a smile will definitely pass on their positive experience doing tax refunding to their family members, relatives, friends and colleagues who will eventually be our future Tax refund customers as well.

It seems that we will have a promising turnover of IA payment.

Thanks to our IT experts and the people who worked hard to make this successful change happen.

I am proud and happy to be a part of the Planet Family!!!

I guess it is already that time.

It sounds like an old person who’s bone and knuckles are making strange noises all the time. At a step, when bending, when standing up…upon sitting down. Its pain can be heard by the creaking noises it makes.

I guess it is really just normal. I feel the same about my body sometimes… yikes!

But, I, with my practicality and stingy-sense, still want to try and salvage it. I told hubby to just oil and repair the hinges that have been complaining all the time. In the end, I have to admit… and accept the fact: It’s time to find the replacement.

weeks now, hubby and have been planning and hunting for a new kitchen.

We have been to several companies getting expert advises and checking out their exhibits, but.. so far, with no luck.

Didn’t I mention already that I am ahemmm.. practical???

Should we? shouldn’t we?

w much must it be?

I didn’t realize that to buy a whole kitchen the price range that I would need to consider should be somewhere from 5K upwards. And see how simple it is.

That’s like buying a new car in the Philippines. Consequently, that’s also the same price that a house renovation in the Philippines would cost. A whole life’s worth for some…. and here in Europe, it’s apparently a normal kitchen price to consider. Dühhh!!!

…my birthplace, my childhood and my Mamang…

My parents were always out of town or out of the country – busy making a living. Hence, we – my siblings and I were left behind with our grandmother in the old house in Dipolog; the city where I was born.

The house was made out of wood and was elevated enough to avoid it being flooded. The front door entrance stairs and landing were made of cement though. Connected to the landing a small cemented room where we did the laundry and took our baths. No, it was not the toilet, because our toilet was located at the back of the house on a separate lean-to-cube.

Yes, I guess, that was how it used to be in the Philippines. Most houses didn’t have the toilet inside the house. One needs to take a candle or some kind of torchlight to go to the toilet at night. That was why the kids grew up with the routine. On a school week, some days after school, we were allowed to play around with the neighbors’ kids along the streets, until before nightfall.

In the Philippines, it gets dark quite early. So, we were always told to clean up: wash the hands and feet or take a bath and do toilets rituals before dinnertime. Sometimes, we wanted to play a bit longer out on the streets, this was okay as long as we were all clean and smelling fresh before our grandma would come home from work. Yes, she went to work – how else could she have raised all 10 children on her own without her husband? Our grandfather left her early. He succumbed to Tuberculosis-but that’s for another story.

If one was caught smelling like dried sweat and sunburnt, then our grandma would know that that person missed the ritual because he/she must have come home really late. He or she would definitely get punished.

The punishment was never violent though. The punishment was either to recite the multiplication table or recite some kind of terribly long poem. Or perhaps sing a song in front of everybody. The singing was fun.

The poem was one written by the Philippine National Hero, Dr. Jose Rizal’s, i.e. “Mi Ultimo Adios” in Spanish or “My Last Farewell” in English. Yes, at that age, we were already taught to speak English and Spanish. I never had problems with the first one. Just Spanish … and the multiplication (Math) were both my Waterloo. Both were really, really hard for me. I do regret it now though. I could have made good use of the Spanish language at work. Unfortunately, the few words that got stuck with me are not enough to make a proper conversation with a local Spanish speaker. Oh, I digress!

So, I was always careful not to get caught smelling like I’ve been out in the sun the whole day. Or getting caught coming home late. I made sure instead, to be able to go out on weekends. The excuse I most of the time used was to sell any excess harvested fruits from my grandma’s farm. I loved that chore because of several reasons.

First, I could walk around the whole neighborhood, seeing my classmates and friends along the way. Second, the earnings I got from selling the fruit was my own weekly pocket money. Although I still had to give it to my grandma, I always felt like it was mine, since I worked hard selling it. Third and probably the most precious to me, was the freedom to be alone for those few hours. Growing up in an extended family household, one would have no peace and quiet. Don’t get me wrong, I loved it. I grew up with my brother and two sisters and several cousins. We were always together, after school, during weekends, either just studying, watching movies, playing at the city plaza or spending time at the beach. We were allowed to do all these as long as we have all done our assigned household chores. That’s our childhood generation.

OH, by the way, at that time, worries and fears about children being abducted, kidnapped, to be sold somewhere for slavery or worst to be robbed of their organs to sell or scattered pedophile snatching/molesting kids— was nonexisting! If I am not mistaken, that only came up later in the 80’s era and only in big cities.

Anyway, today, I woke up to a dream. 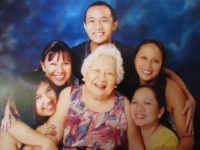 I dreamt about being in the big wood house in the Province. I dreamt about the song my brother used to practice at home for a school musical. I dreamt about being with my grandma again. In my dream, I was sitting close to her…smelling her beautiful fragrant, soft skin. I was rubbing my face to her arm while–thumb sucking! Yes, I also had that very nasty habit until I was 7 years old. It was a sign of my insecurity, I think.

In my dream, the next scene: I was watching my brother practicing his own version of Harry Belafonte’s “Banana Boat Song”. I could hear myself humming along to his song. I saw myself looking up to my grandma. I felt the longing… then I woke up.

My grandma passed away two years ago. Since then, my sister Diday and some relatives have often been vocal that they got a “visit” from our grandma. Whether they were lucid dreaming or they just felt something of her. Smelled her fragrance. Or felt her presence.

I never experienced this before, so whenever they mentioned or talked about the experience, I was always curious and envious. Now, not anymore. I just miss her more.

To help me at work and of course, for self-developmental reasons, I started learning the Korean language.

Ahemm,… okay, admittedly it is actually just an excuse… I am also hooked on KD’s. I believe I already mentioned this in a previous blog. I just don’t know right now, when it was exactly… hehehe. So typically ME!!

Since I like the sound of introducing myself in Korean, I Have just got to end this with: